My decision to go to this show was a very spontaneous one– so spur of the moment, in fact, that I chose to go literally six hours before the show started, and I’m glad I did. It wasn’t until I arrived at The Observatory in Santa Ana, that I began to realize that this show might be geared for an audience a decade or two older than my generation, because I found myself among seasoned adults and married couples with the occasional youth sprinkled here and there. Needless to say, I didn’t quite “blend in.” But it was no matter: music transcends age.

I quickly made my way to the main stage to find Mike Watt and the Secondmen about halfway through their set. While it might seem ignorant of me, I have to be honest and tell you that I had no idea who Mike Watt was, let alone the Secondmen ( I have now remedied that), and so when I walked in my curiosity was piqued and I quickly made my way to the front and center to get a better view. It didn’t take me long to figure out who was Mike Watt because although he was the bassist, I felt like he was the one truly commanding the stage. His eccentricity was strange, yet compelling. Looking back I wish that I had gotten to hear their whole set, because I ended up really enjoying Mike and the Secondmen, their vibe was fucking cool.

Now, given that I’m practically a baby in the eyes of the world, you can’t give me too much shit for not knowing who The Blasters were (c’mon cut me some slack). My first thought when they started was, “Damn, that decrepit looking motherfucker can FUCKING SING.” Of course, I’m talking about frontman Phil Alvin, who is only 62 but looks like he is 75. I remember watching him strum on his guitar and thinking that his hand looked like it was the hand of Dracula, I swear, it was like it was going to just crumble into dust. Okay, okay…. no more old jokes. The Blasters set was fun and entertaining and I couldn’t help but move even though I was recording a majority of the time– their music was just too good to sit still.

My thoughts about X that night: Exene is a bad bitch, John is rad, and Billy is an OG. 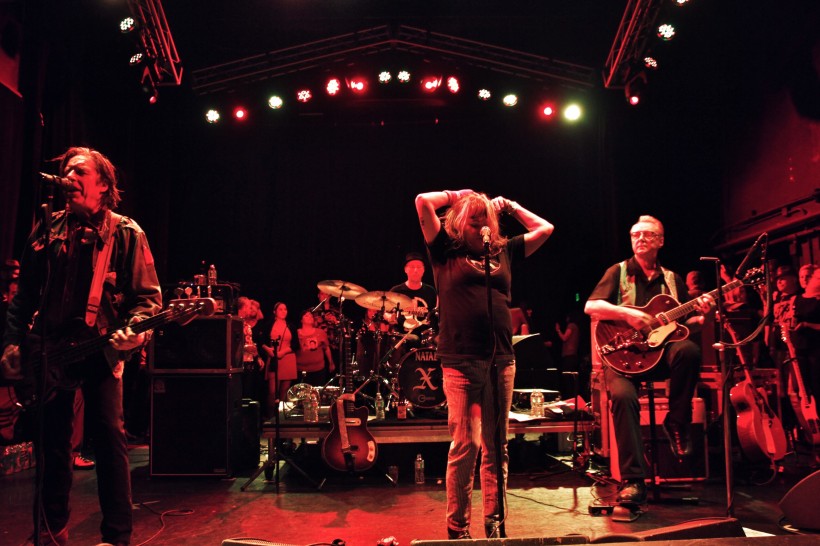 Needless to say, X killed it, I mean really, they were fucking awesome– couldn’t stop smiling the whole time. However, during the show, I couldn’t shake this strange feeling. At first I couldn’t quite pinpoint it, but I realized later that it was jealousy. I looked around the room to find everyone euphoric. I mean yes of course, I was having a great time, but I didn’t know which song was being played as soon as the first few chords were struck, I wasn’t singing the words to every song, and I wasn’t jumping up and down with delight when my favorite song was played. I couldn’t help but feel slightly alienated from everyone else because I wasn’t the same kind of fan and I envied the others. It was evident from so many people– I could see it on their faces, that each song held some kind of emotion or memory that was alive long before I was; X was reminding everyone there of themselves at my age.

Music is a time machine.

I’m very pleased with my choice to come out and see some music history, and even though I may not have been a total fan when I came, I left as one.